According to a press release from the Lethbridge Hurricanes, Pittsburgh Penguins forward prospect Jordy Bellerive was involved in an incident and has been hospitalized, along with one teammate and one former teammate.

UPDATE 3 p.m.: The official update mentions that there was an explosion in a fire pit that caused burns: 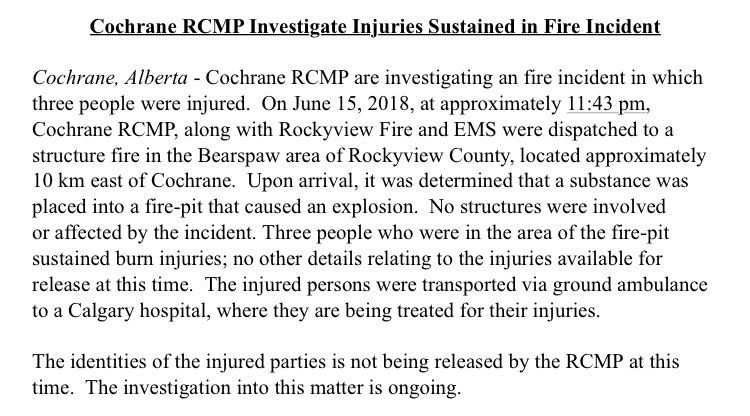 Update 9:32 a.m.: Per the Pittsburgh Penguins website, the team has spoken with Bellerive, who is “expected to make a full recovery.” Read the Penguins short statement here.

UPDATE 12:50 a.m.: One of the young men are in critical condition. According to Liam Nixon of Global Lethbridge, the young men were attending a bachelor party and were injured in a fire.

JUST IN: Details on the @WHLHurricanes situation involving @jordybellerive, Ryan Vandervlis, and Matt Alfaro: Sources have confirmed all three were injured at a fire that happened at a stag party they were attending. One of the three is in critical condition. #yql #Lethbridge

It is currently unknown which player is in critical condition.

The Hurricanes hockey club of the WHL did not release details of the accident or severity of the injured. The Hurricanes reported the players suffered various injuries. The full release can be read on the team Twitter account.

The team also asked for privacy on behalf of the players, families, and organization. The Hurricanes will release additional information as it is available.

The Penguins signed Bellerive to a three-year entry-level contract before this season. The 5-foot-10 and 196-pound center was undrafted but earned a deal after a sparkling rookie tournament, last September. His point totals for the Hurricanes of the WHL increased each season. He had 36 points (11g, 25a) in his first year, 56 points(27g, 29) in his second season and 92 points (46g, 46a) this season.

Bellerive, 19, participated in Penguins Training Camp this season. He played in one preseason game. He had one shot on goal and one minor penalty. His growth has generated a buzz among Penguins prospect watchers.

Related Topics:Featuredjordy bellerive
Up Next

The Time to Bolster Penguins is Now; Trades at NHL Draft are Best Chance